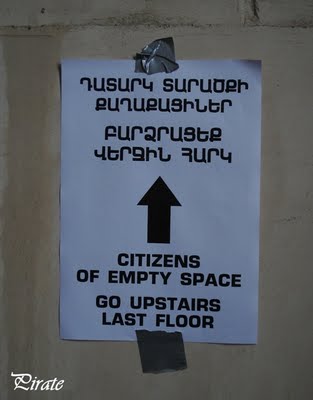 We also met many people working in plastic arts, theatre, dance and film, as well as various civil rights groups. We were able to speak together about our experiences in reclaiming and acquiring spaces. We were stunned to discover that about 30% of the buildings in the city were either unoccupied, abandoned during construction, or new but empty. But Yerevan differs in a few major ways from Switzerland. The notion of public spaces does not exist; streets and parks are privately owned by government officials. The Land Registry is considered confidential for security reasons and is not publicly accessible. It’s therefore impossible to know who owns what. During our stay, the opposition party held its annual mass protest so we composed and distributed 2000 flyers (in Armenian) with the help of various people from local political and cultural NGOs. The flyer had a link to the “Citizen of Empty Spaces” Facebook page with an interactive city map allowing people to identify empty spaces, to list their size, how to access them and other useful information. To illustrate our intention, we presented our project during the “City in Use” festival in an abandoned building. Stefan and I are still in contact with people involved in the project, but things move rather slowly in Yerevan slower even than in Geneva.